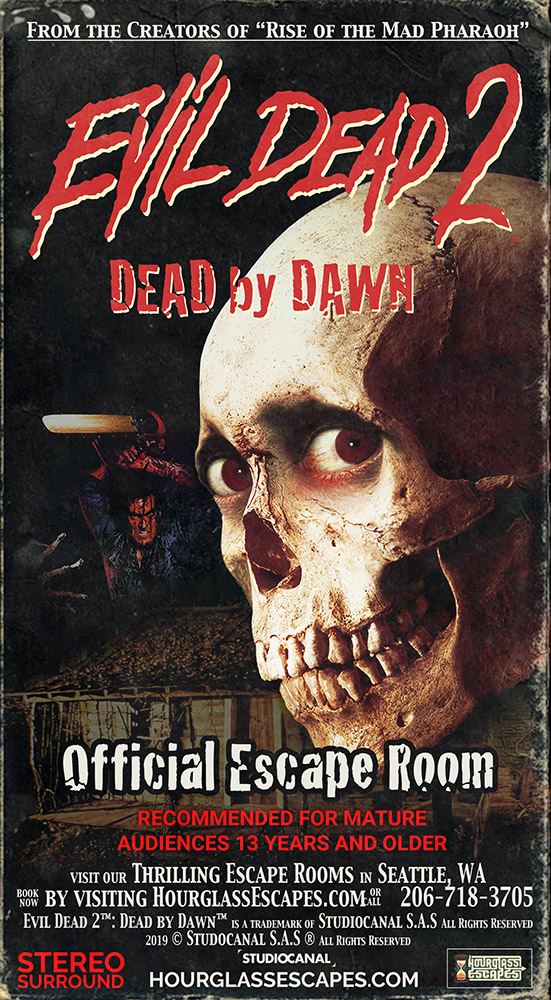 It’s your chance to escape the evil dead before they swallow your soul in the first officially licensed escape room, granted by Studiocanal S.A.S. through Creative Licensing, based on Sam Raimi’s classic horror/comedy Evil Dead 2: DEAD BY DAWN™.

When players enter that all-too-familiar cabin in the woods, they will have until dawn (or 70 minutes, whichever comes first) to find the Kandarian dagger and destroy the book of the dead before the evil dead swallows their souls. Fans of the classic film can expect deadites, chainsaws, a freakish deer head, a chained-up cellar door, and a groovy cameo from Ash Williams (as portrayed by TV actor Donal Thoms-Capello).

“I can’t wait to transport folks into my all-time favorite horror movie,” said Hourglass Escapes founder and creative director Seth Wolfson (Universal Studios Orlando, Ripley’s Believe It Or Not). “We see this not as an imitation of the excellence that Sam, Bruce, and their crew created, but as a tribute to their unforgettable work.”

Wolfson was careful not to spoil the room’s many surprises, but he did say, “Players are given characters and special items just for them, making this a one-of-a-kind escape room experience. Fans will love all the little details, and for those who have never seen the film, we promise a scary and fun experience for them, too.”

Hourglass Escapes next project is going to be Escape Room board game created in conjunction (yes, the stars are right) with Chaosium, Inc.